The European Football Leagues Profiles on social platforms have seen a huge push during the past 2017/18 season.

In the past, the roles for the individual league profiles have been very diverse. While LaLiga and Premier League used their profiles on Facebook, Twitter and Instagram predominantly to get their league known in the last corner of the world, Bundesliga did focus on core markets, while Serie A and Ligue 1 mainly used the platforms for sharing updates (transfers, results and league tables).

More and more now each league understands the strategic value of social platforms in the communication and marketing mix. And this mix requires information, live updates, but a lot more entertaining and relevant content for the target audience.

Spanish LaLiga had an immense year, growing across all official social platforms by more than 20 million new online fans. Strongest growth was achieved on Facebook, were alone 13,885,776 fans joined the community of LaLiga. We spoke to Alfredo Bermejo, LaLiga’s director of Digital Strategy and he provided some great insights into the revised overall approach (see further below). 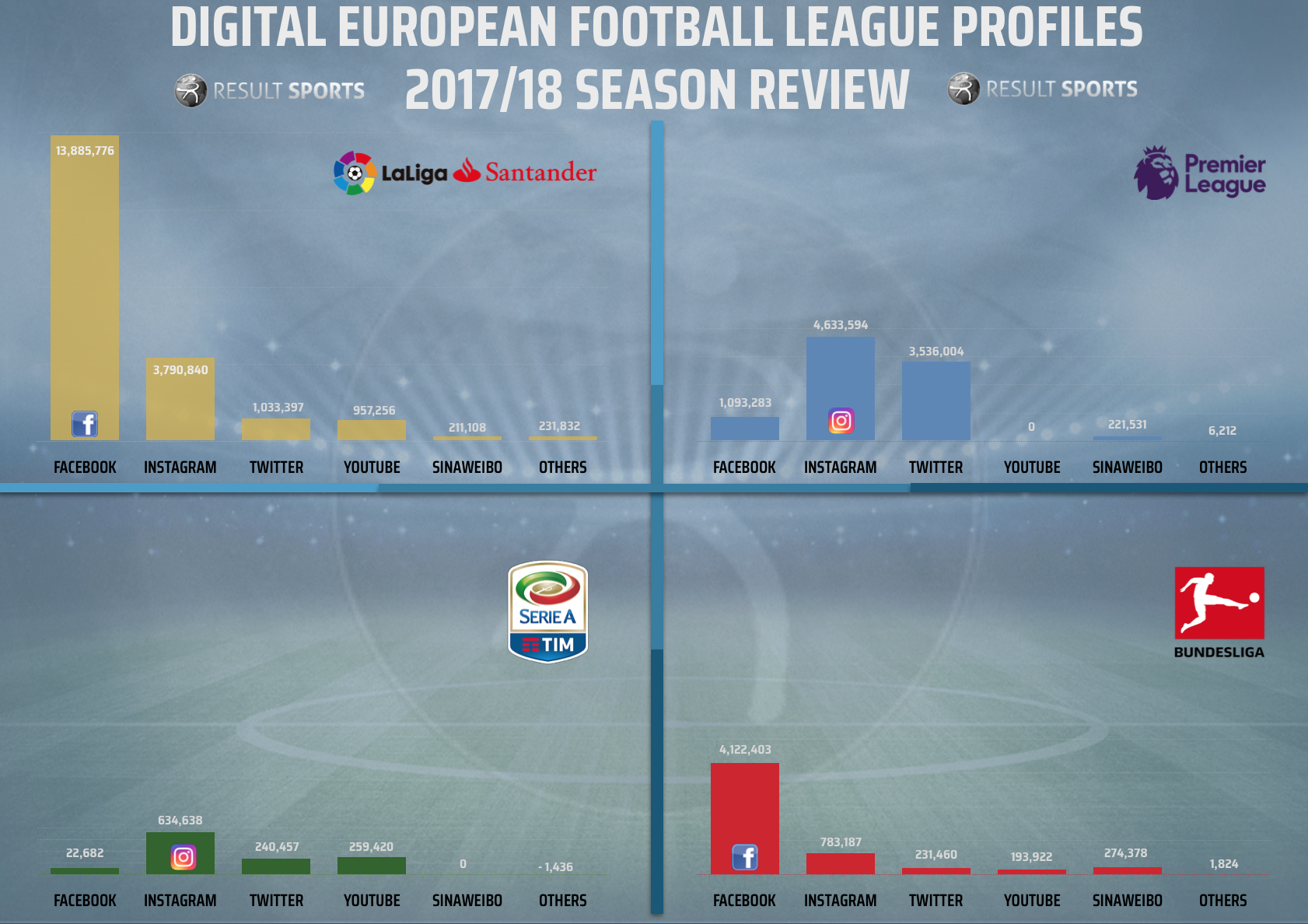 It is very interesting to see the different approach. While LaLiga and the German Bundesliga set their objectives on Facebook, we see the British Premier League dominating on Instagram and Twitter.

As we all know by now, Twitter is for the instant, almost live news updates and the objective is to reach the online target audience on their newsfeeds with the latest news. And the Premier League certainly has a grip on this. And Instagram is all about entertaining a younger audience, get the videos and enjoyable content out to attract the young mobile user around the world. With success, as we can witness. 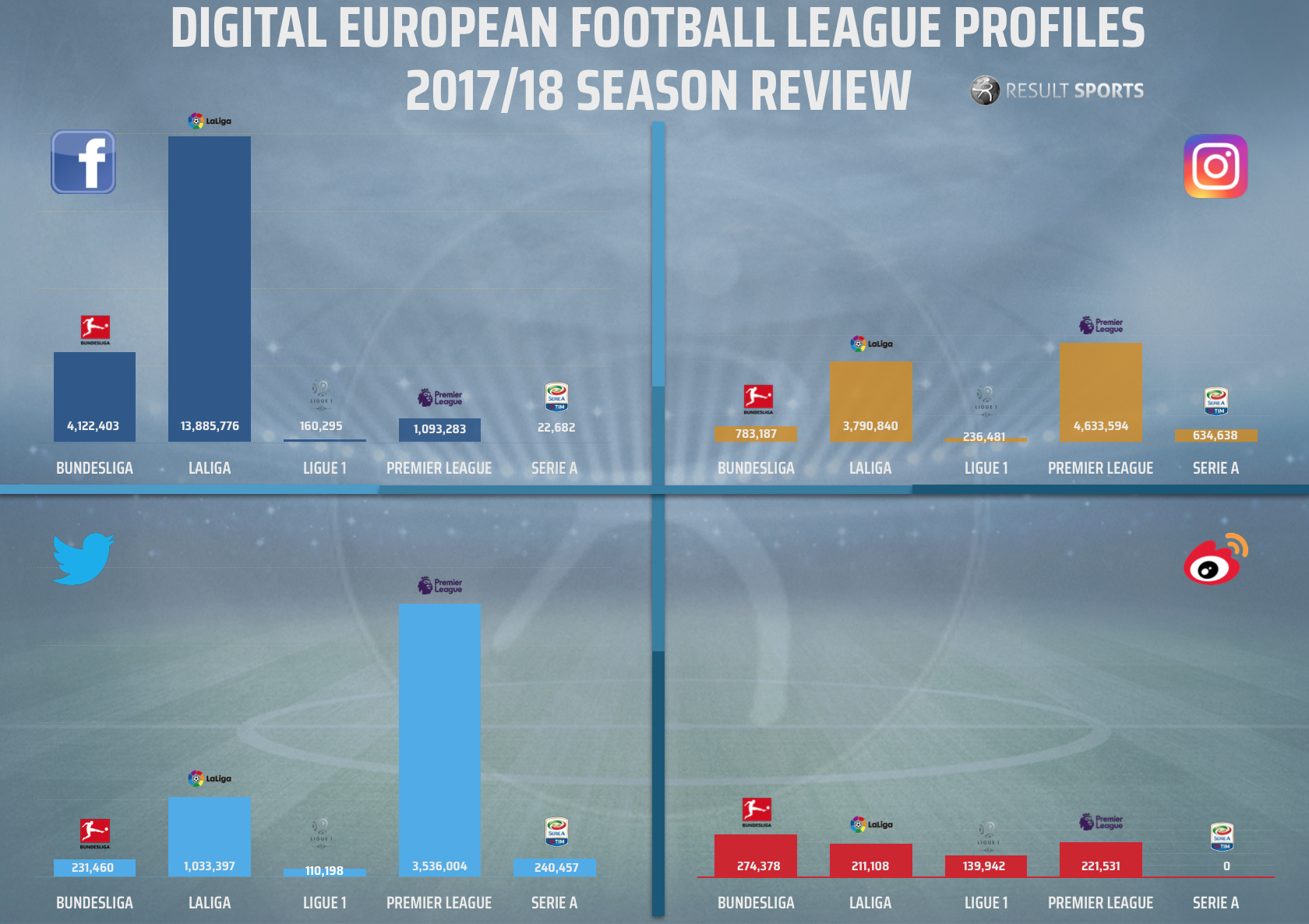 To understand the objective and strategy behind this massive impact of LaLiga on a global level, we spoke to Alfredo Bermejo,Director Digital Strategy at LaLiga: 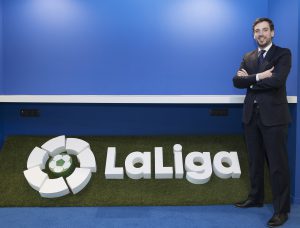 The 2017/18 campaign saw the competition enjoy massive growth in terms of interaction. As LaLiga’s director of digital strategy, can you tell us what changes were introduced, both before and during the course of the season?

Over the past year, we’ve rolled out a clearly defined content creation strategy within our digital ecosystem. Our approach involved establishing a consistent message that was easily recognisable for a global audience. Our message needed to be both global and local, so as to cater for the different languages and cultures and ensure that we were offering content that was appropriate to each region. The aim of this strategy is to be both a global and a local brand. Another of the avenues we’ve explored is to adapt the message. We have to be aware that we can’t simply limit ourselves to satisfying our Spain-based followers or purely translate content. We need to adapt and understand what’s relevant to each market. Whilst in Spain the premium product is highly sought after, the appetite internationally is far greater still. In addition to looking at the ways to communicate our message, we’ve extended our reach in terms of languages. We’ve gone from communicating with our followers in Spanish and English to doing so in over 10 languages, which has brought us closer to new communities and fans. LaLiga is a global entertainment brand, we boast the best product on the planet and have to take full advantage of that.

Cultural marketing clearly plays an important role. Can you tell us about the differences in expectations between an Asian football fan when compared to their European-based counterparts or followers in the Americas?

Whilst remaining faithful to the way in which we communicate and interact, we’ve established a global workforce through which we’re able to gain an in-depth understanding of our fans’ tastes. We therefore know that Asian followers are more interested in the big stars than the clubs, although this is a trend that’s changing. Meanwhile, in Europe, for example, supporters have a high level of knowledge about the players and clubs and we’re therefore able to adapt our approach accordingly. However, as far as growth potential goes, the Asian market is really where it’s at.

How do you see the development of the African continent impacting on LaLiga in the coming years?

Despite internet penetration levels still being very low throughout Africa, online access is now a reality. The African continent has witnessed the greatest growth globally, with a 20% increase in the past year. For example, the response to the content we provide in Pidgin English for the Nigerian market – as it’s very widely spoken throughout the country – has been very positive. In addition, we’re seeing some pleasing results with content produced in Swahili for the Kenyan market and throughout Eastern Africa.