INTERNATIONALISATION – GLOBAL REACH – two terms we have been hearing for quite some time now. RESULT Sports continues its series on providing insights into the digital status quo of athletes, players, sports leagues and federations with a Facebook Analysis of five major European Football Leagues.

Where are the Facebook communities of Bundesliga (Germany), LaLiga (Spain), Ligue 1 (France), Premier League (United Kingdom) and Serie A (Italy)? 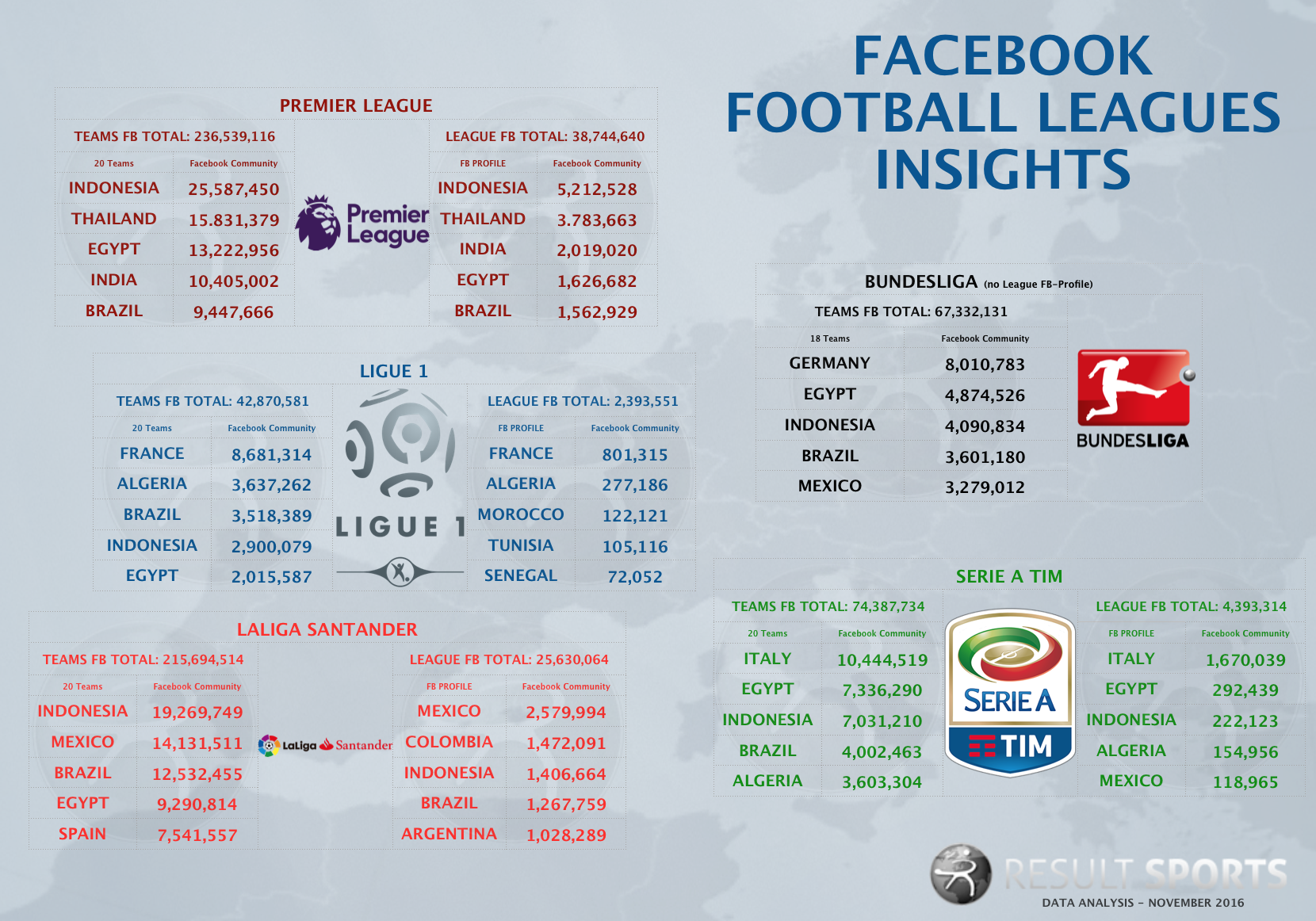 Taking a look at the official Premier League Facebook profile (right to the logo) we do find the same five countries, not in the same order and each with approximately 20% of the likes as the combined teams total. Overall the Premier League is in global digital pole position on Facebook.

LaLiga represents with FC Barcelona and Real Madrid the two biggest global digital brands, but in an overall twenty teams combined view, LaLiga reaches only second position, with a total of 215,694,514 Facebook Likes. Taking a closer look to these figures provides further clarity. Barca & Real achieve a combined total of 187,502,780 ‘likes’. The eighteen other teams ‘share’ the remaining 28,191,734 fans.

Similar results are shown for Mexico (85,46% of total Facebook community are either FC Barcelona or Real Madrid likes), Brazil (87,49%) or Egypt (88,37%). One important observation for LaLiga is the strong support within the country, as Spain is ranked as the fifth largest Facebook community.

Taking a look at the official LaLiga Facebook profile, the Top5 Facebook communities differ a bit, where Mexico leads both Colombia and Indonesia.

As for the Facebook communities for Bundesliga, Ligue 1 and Serie A, we observe each ‘home’ country in the lead, both for the combined Facebook teams community, as well as the individual league profile. Except Bundesliga, where the league itself does not offer an official Facebook Profile.

With Brazil, Egypt and Indonesia we see the same three countries in the Top5 for the teams in all leagues. Facebook fans from Algeria come in fifth for Ligue 1 and Serie A, while Mexico completes the Bundesliga Top5 ranking. Chicharito (Bayer Leverkusen) and Marco Fabian (Eintracht Frankfurt) are two key incentives for Mexican fans to follow the Bundesliga.

With this thought, we end todays Digital Insights series from RESULT Sports. If you have any questions, please do not hesitate to reach out on info@result-sports.com.