We are very proud to release today the Global Digital Benchmarking Analysis.

The results, at the top are hardly surprising. The biggest European football clubs are a long way ahead of the rest, with Barcelona and Real Madrid heading the pile very comfortably indeed. The geographical divide would have been obvious without this undertaking, but the differences are stark: Turkish football club Galatasaray are the first club outside of Europe’s top five leagues to feature, whilst Corinthians of Brazil are the first non-European club, coming in at 15th.

The Brazilian side’s 19m-strong combined following is more than ten times smaller than that of Real Madrid and Barcelona, and whilst that shows the geographical divide is pronounced, it also shows that the concentration of power lies with just a handful of clubs. If Real Madrid and Barcelona have ten times the audience of the 15th placed club, that shows the scale of the disparity. You don’t even have to go down as far as 100th place to find a 2m follower audience, 100 times smaller than Spain’s Clasico twosome.

And yet, in the end, these are pretty widely seen as vanity metrics these days. Having a big audience is certainly no bad thing, but the more important question will always be is it an engaged one? Just having a few million followers doesn’t really mean anything other than the small pat on the back you get for winning at Facebook.

But Mario Leo, founder of RESULT Sports, doesn’t think cooing over how many followers a football club can boast is the only reason for producing the study.

“The Global Benchmarking study fulfils two (critical) aspects,” he says. “First of all, it provides a single source to compare teams on different continents, and shows where the global digital football leaders stand. And secondly, [and this] is probably much more unrecognised, we share the status of the technology ‘battle’ [which is] happening in the background!” 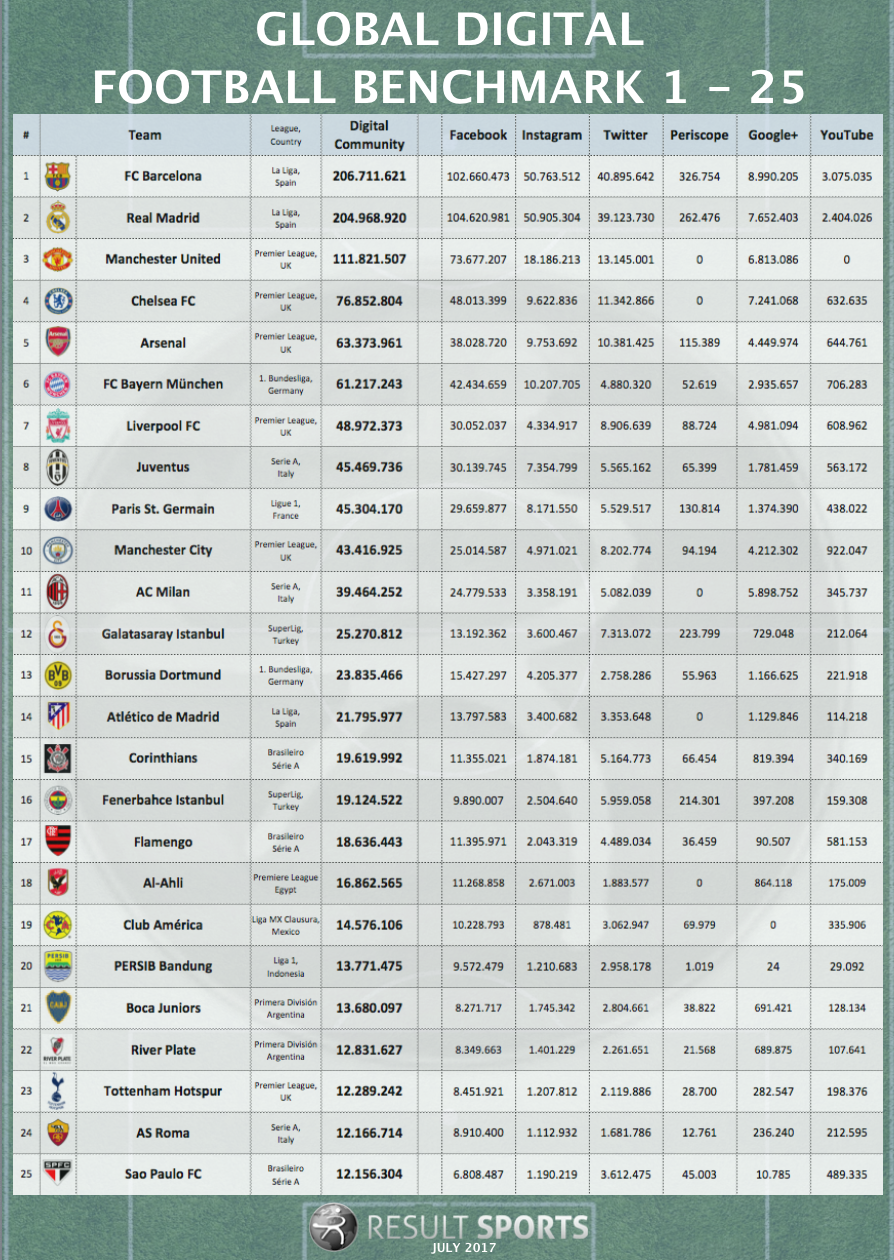 “While many only focus on the follower and engagement side, you have to also understand what the impact of communities and usage means for the technology platforms themselves – hence the social platform choice: Facebook & Instagram, Twitter & Periscope, Google+ & YouTube. Especially Google needs to increase ‘value’ to keep its position and relevance in sports.”

As both platforms – as well as Snapchat, who are joining them in the race for rights to highlights to next year’s World Cup – look to snap up more and more live sport for their platforms, it’s crucial for them to maintain their relevance in the sporting world. If fewer and fewer football clubs are worrying about their presence on Twitter, for example, that could compromise the platform’s ability to position itself as the home of breaking sports news and live sport itself.

And so these rankings aren’t just vanity metrics for clubs and some of their more boastful fans, but they are also a crucial insight into how relevant each social platform is. It shows which are growing and which are becoming less important. Beyond the top five or ten clubs, for example, Google+ is increasingly irrelevant, and you don’t have to look past the first page to find Club America (in 19th) who can still maintain their position even with a grand total of 0 followers on Google’s platform. 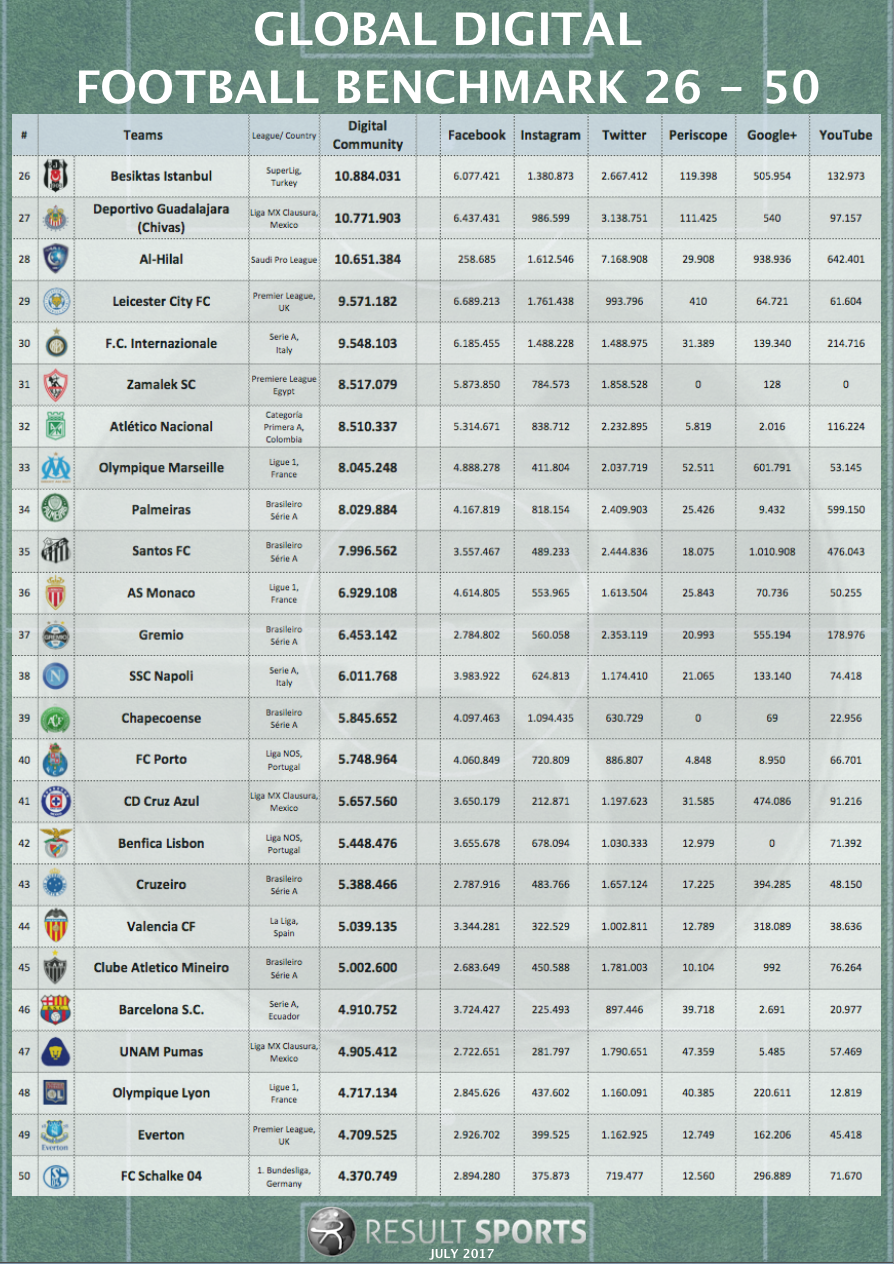 It is also worth noting that Chelsea, Manchester United, Atletico Madrid and AC Milan haven’t adopted Periscope, whereas the other big European names have, whilst United are the only club in the top 30 not to have a YouTube account. The question then becomes what does that mean for those platforms and their relevance for sport? As times change, football clubs won’t stay still, but it would be a mistake to think that the social media platforms will, too. Social media has become vitally important for football clubs and will probably remain so, but that’s not the same thing as saying, for example, that Twitter will remain that important.

“We have provided digital rankings since 2010 and I remember the days when social media managers received no real recognition for their critical work,” says Leo. “Luckily that has changed, and the importance of data analysis and metrics are crucial for most football clubs these days. But it is not only the size of the community, it is important to engage and interact with fans online. And Sponsors want to be on those digital channels too, because they would like their brand in front of an emotional and passionate community.” 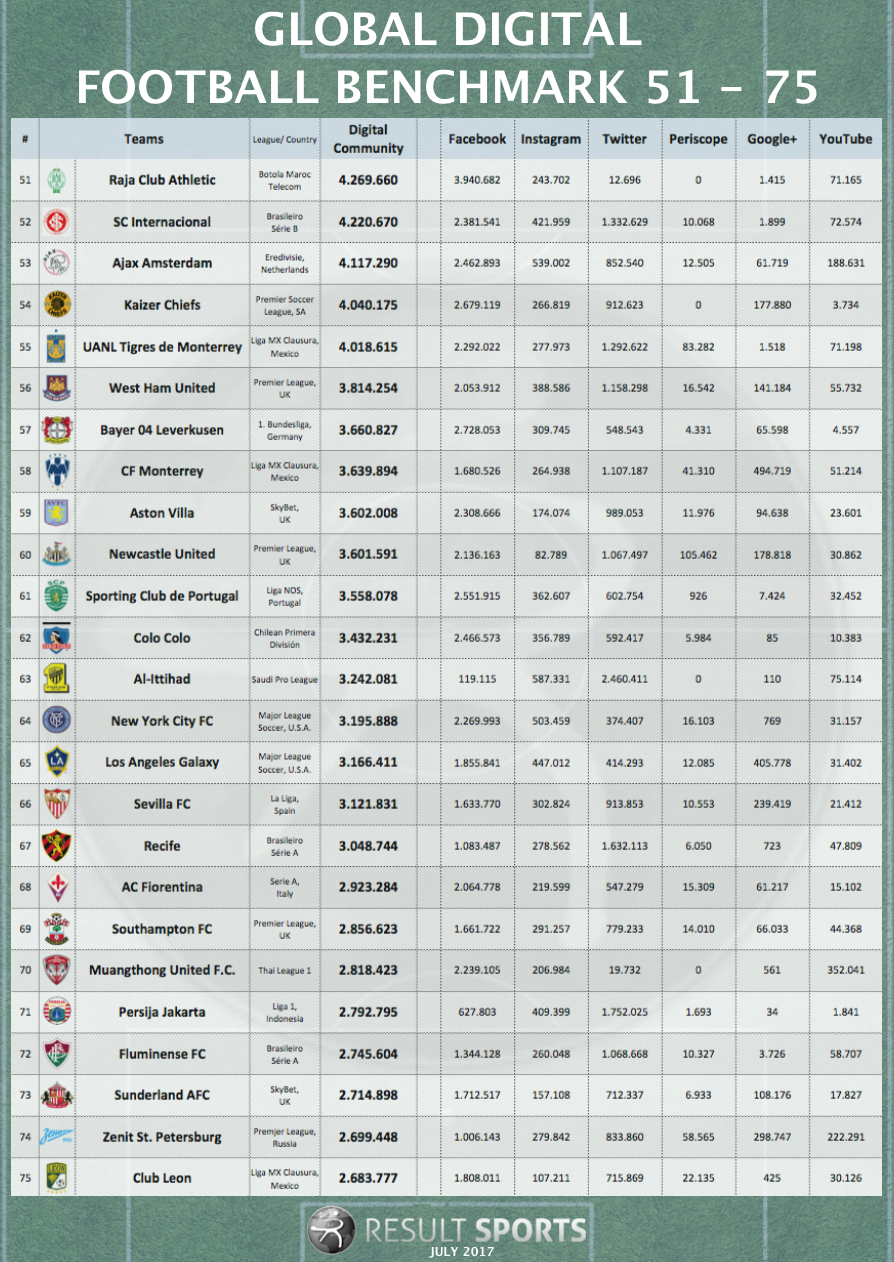 Despite the obvious self-congratulatory nature of boasting about the size of your social media following, it does have real knock-on effects for clubs, sponsors and even for the social media platforms themselves. All will be looking with interest at the table RESULT have produced, and – for very different reasons – it is important for everyone.

“I am biased,” Leo says, “but I believe ‘content is not king’ unless you have identified which content is most appreciated by which audience. And for this, you require data insights and analytics.” 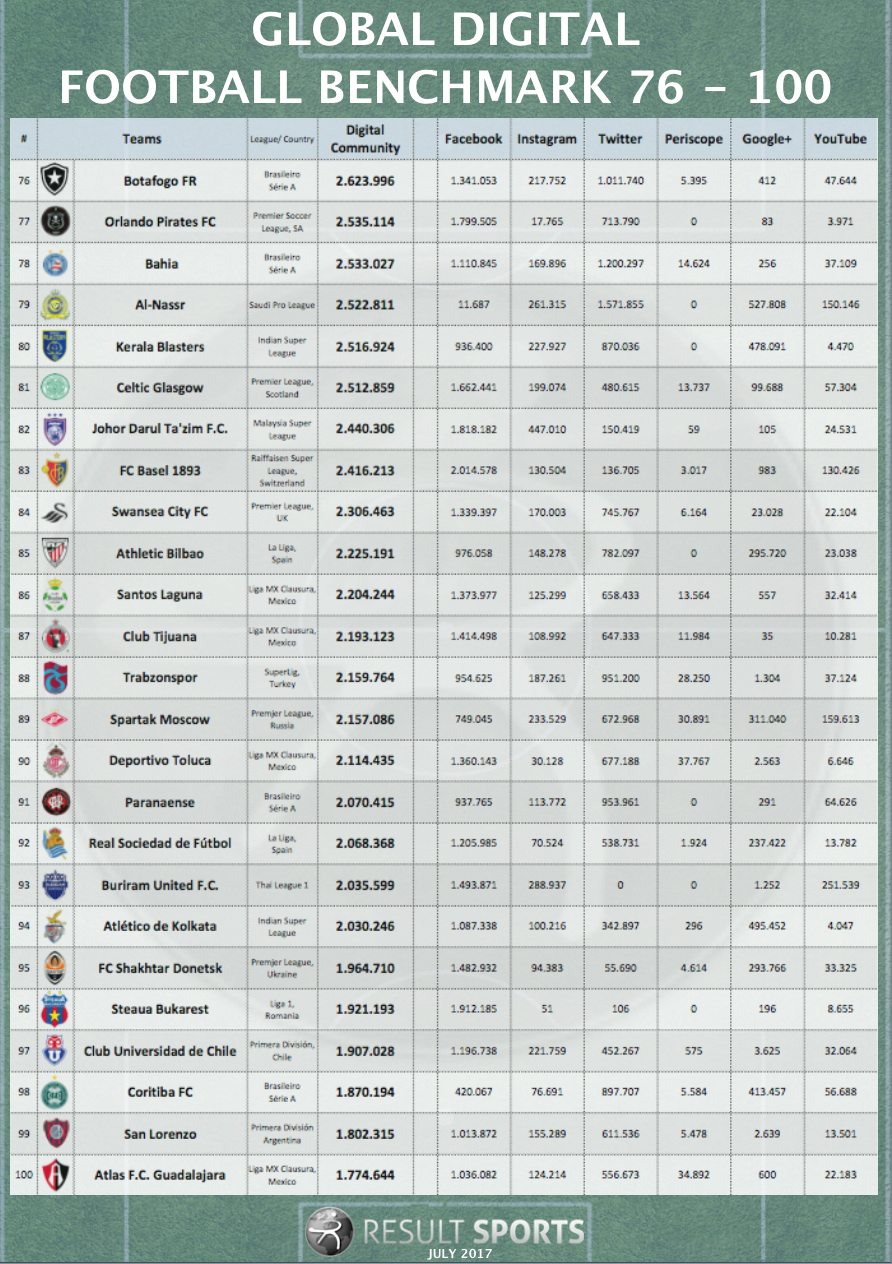 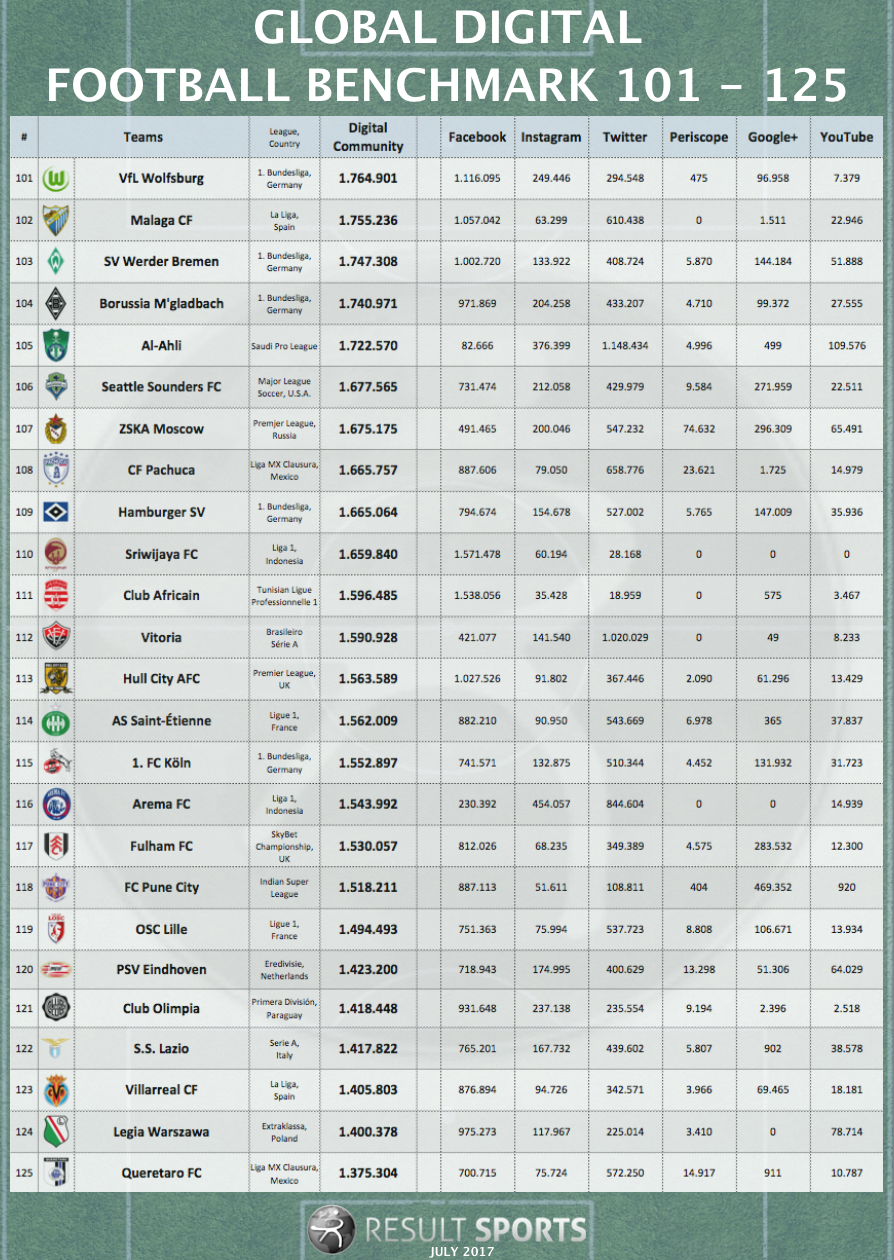 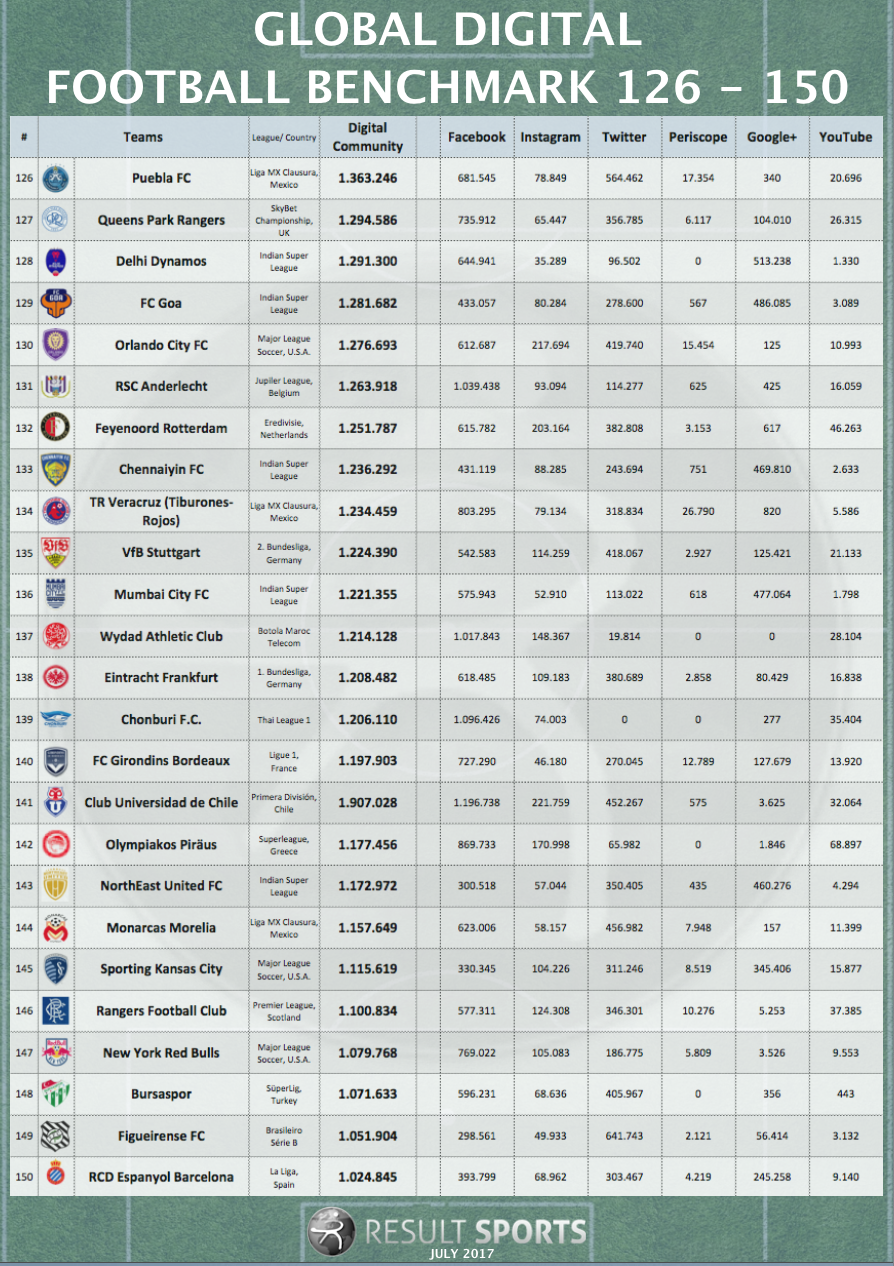